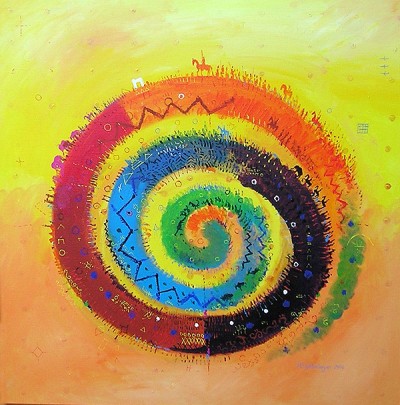 A painter, graphic designer and illustrator based in Bratislava. Creative artist, but also an admirer and connoisseur of music, literature and history. Staging exhibitions both at home and abroad. In Bratislava, Strasbourg, Vienna, Graz.  His work reflects the European and world cultural history. Kellenberger finds inspiration in the primeval age, in the Atlantis myth, old Egypt and Greece. Biblical themes are frequent in his works of art, just as we come across personalities from Middle Ages, Modern Era and Avnatgarde – Gutenberg, Komenský, van Gogh, Ensor, Klee… The author has also been faithful to the poetry of fairy-tales. Exotic topics are represented in his work by American Indians and reflections over the American pop art. He sees into the universe from the surface of our planet. Up to the stars. Into the infinite space. On the Earth, he is faithful above all to humanity of human kind. He believes in the values of human civilization, culture and humanism. At this point, however, his belief is connected to both hopes as well as fears. Will the human world remain a good world of people? Of human understanding? Of feelings and wisdom? Will it, or will it not?

This question mark is a symbol of circle and of the spiral of history. I tis a symbol of lights, shadows and darkness of our warld and universe, where everything is flowing. Martin Kellenberger is a person and artist who has been clearly aware of „panta rei“. Everything flows. The world has been a ceaseless course of events. Everything flows, Heracleitos from Ephesus said this as early as in the fifth century AD. Everything flows – this is valid even today and always. Countless phenomena of the flow have been demonstrations of life, movement, development and changes from the moment of big bang. Human lots take place and flow, as well as human lives, lives of individuals. The continuum of flow accompanies also the culture of mankind and the history of art. The creative work of Martin Kellenberger also flows. Picture scenes and symbolic meanings flow in it, stories and mesages, entire events as well as fragments of situations and states of being of humans, anchored in their history of human race. Lines, shapes and metal plates also flow in paintings, drawings and graphical Works of Martin Kellenberger. There flow pictograms and letters, the iconic and alphabetic culture of human kind flow and merge in them. Suggestive gestures of the painter and drawer are of a flowing nature also. The magical, colourful stream of his pictures and colours of the world of being and human awareness of the artist and his art. 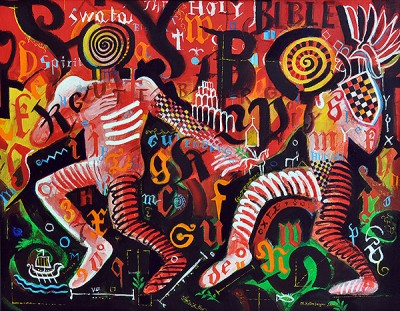 Martin Kellenberger accentuates in his creation merging of phenomena of expressions and meanings, visual and narrative. Language and contents, forms, signals and signs merge, narrative art transformed into pictures merges with images of ideas. The profile of the autor, too, is a harmonic synthesis of the poles of the graphics, illustrations and paintings in the unity and power of a creative personality. The artistic personality of Martin Kellenberger was formed also by the Works of his father, a graphic designer and illustrator Ľubomír Kellenberger (1921-1971). Interdependencies of the works of art and their generational context and the art of the new figuration of the late 20th century are of great importance. They refer to post-modern links between the signs and symbols, gestures and rhythm, connection and overlapping of human figures and beasts, environment and architecture, things and phenomena, earth-bound and cosmic and their meanings and values. There is also a connection between the past and present, and the present and the vision. The art of Martin Kellenberger speaks about the eternal flow of human culture. That is the deepest and beautiful sense of this art.